Doctor Fidel Goldson, Jr.  is a licensed physical therapist and chiropractic physician in South Florida. He has been in practice as a licensed physical therapist since 1999 and as a chiropractor since 2006. In addition to his doctorate in chiropractic, and B.S. in physical therapy,  Dr. Goldson also holds a B.S. in anatomy and a master’s in liberal arts studies.  He is also a licensed general contractor and currently heads up Goldson Spine Rehabilitation Center which consists of four locations throughout Broward and Dade counties. The practice specializes in rehabbing patients suffering from auto accident related ailments, sports injuries, headaches, neck and back pain. Armed with years of patient care experience and a concern that products on the market were not offering patients the relief they needed, Dr. Goldson and his wife Dr. Thiema Goldson developed a spine, joint and muscle cream specifically designed with his patients in mind and is currently available at all Goldson Spine locations.

Dr. Goldson also takes pride in finding ways to serve the community through the Dr. Fidel S. Goldson, Sr. foundation, an organization created in honor of his late father who was also a chiropractor.  Through the foundation, Dr. Goldson and the Goldson Spine family are able to provide scholarships to college bound students in south Florida and in Jamaica, school supplies to children in need and mentorship to young adults interested in the applied sciences. Dr. Goldson’s philosophy is rooted in his strong faith in God, his compassion for others, and his belief in teaching young people the importance of an education and the continual pursuit of their dreams.

Dr. Goldson is married with three children and resides in Miramar, Florida. 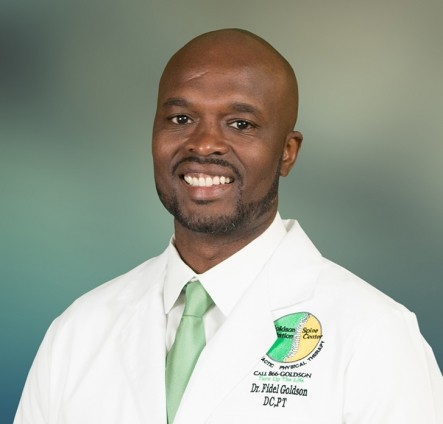